One needs to travel far to know where he can place a chair in his room. This might sound like a profound and ancient Chinese proverb, but it is written by the philosopher Walter Benjamin.

Being able to travel is allowing yourself to change your point of view. Your perspective seems to have been tossed and turned before you come home and see the same distance from the chair to the window. It has a different feeling, even if it is just for one moment.

The more I travel, the more I realise that the notion of poetry has another meaning than we think. It differs, in every country poetry is slightly differently presented, differently organised, published and perceived. It has a different meaning, the notion of poetry, and a different place. I don’t necessarily mean the names of classic poets that can function like icons in our conversations or like knights and queens in our card games. I am talking about the contemporary, poetry in its present form, that in every place on earth seems to have a different incubation. This does not relativize or undermine our notion of quality, it only teaches us that we are bound by the limitations of our perspective, even in our appreciations.

I have learned a lot from seeing what I cannot comprehend. It has made me sharply aware of my own limitations. By focussing on the uncomprehensive, perhaps at times I have lost my sense of orientation, sometimes I have given up my place and let my chair be taken. But it made me stronger in discovering new forms, to accept the loss of a certain format. To travel home became at times more and more difficult. There was so much I brought from my journeys, that I became afraid of the limited space to show it, to report on it. I wanted a language in between the spaces, that I could practise to comprehend what I had seen and experienced.

Are there poets who have fallen out of their own language by being away from the root of it too steady or too long? I hope and believe not. Poets bring and transform the language they write and make it their own. It is not fixed to a territory. The poets that I like from the past were islands, their completed work stands on its own. I tend more and more to the same in the present. Those poets might be marginal at first, their fame or acceptance is trivial, they must be long-lasting, have the courage to endure their solitude. They might be odd towards the literary circles of their time, they should feel or even understand it is necessary to follow their own path. I mean this as a consequence of their writing, not as a romantic pose or opposed role in literary life.

The longer I was away from the language around me that corresponded to the language of my writing, the more I became aware that I was under the influence of rhythms and melodies that were strange to my tradition. Could I stutter like a stranger in my own language, could a rhythm that pulsated like dogs in the summer find words and forms, as Hungarian poet János Pilinszky asked in his meditation. The chair in my room shouldn’t be in the way, it had a required distance to the window not to be constantly taken by observations from the outside only and still gain enough from the light of the day. How minimal could I become and how sparsely would my language still allow me to be a poet with my words. How ordinary, plain, using only day to day language. How timid and withdrawn.

A poem is a garden displayed on a table. Here, there’s gathered what you found on exhaustive walks and travels, a turned nail, the corner of a photograph, as Serbian-American poet Charles Simic explained. How far do we need to push our chair backwards as we walk around our table, looking at our painting from all angles, so that we will not stumble over it and fall?

The table is a vast consoler, wrote Francis Ponge, but you must always go to it, it will never come to you. Thus is our writing that will never start from itself and that we must always feed and surprise, bring souvenirs.

I had a friend who believed his hands were two pigeons, the one caressing the other as if they had been wounded. He liked to throw his both hands high out in the air and expected them to take off. He never knew if they would fly separately or as a pair, if one was female and the other male. My friend taught me to sleep on a chair with his head on the table, one lock of his hair falling over the side. He trained himself to escape constantly, his name was escaping bird. He would never forget the lights on the fishermen’s boats in the harbour in the early morning when he was free. Until the soldiers took him to an island where he did not speak the local language and there was no point in escaping anymore.

Cracks in the corner of mirrored tiles may appear like cobweb on the fences in front of an adjacent room. Images cannot stand on their own without the construction of language. My chair is almost in the corner now and needs a little table on its own.

*This text is written for the conference during the Suining International Poetry Week, March 2-6, 2019, Szechuan Province, China.

Today, Erik and I paid a visit to the Lyrik Kabinett in München where we met a constructive-minded Pia Leuschner and Holger Pils, the director of the foundation.
The library will be an important asset in future research.
First steps in sounding out the situation: 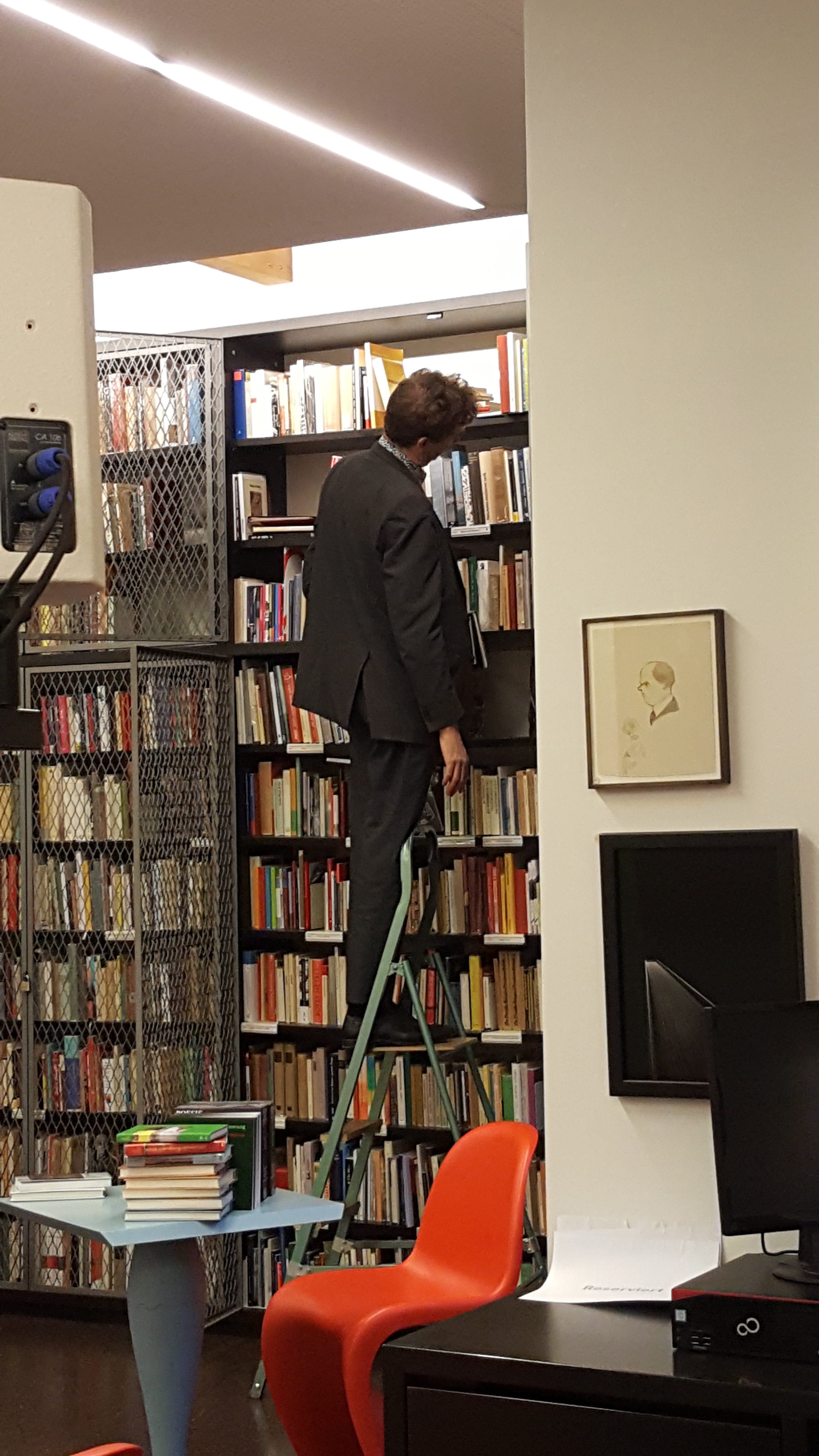 How might we consider the other as integral to self? It’s a question older than philosophy and one that has plagued it. This is not the place for a broad philosophic overview, but I would like to point towards Levinas’ humanistic approach which suggests a moral imperative, thus a responsibility, to exist between self and other. As Richard Cohen has written: ‘For Levinas, the dignity of the self arises in and as an unsurpassable moral responsibility to and for the other person’. This does not just involve basic human dignity towards the other, it extends to the dignity of the self serving the other over economic and territorial interests, social hierarchies, or our various forms and increasingly complex forms of self-interest.

Writing is communal responsibility in action. What are we, if not at least relational to the other? If the other is morally bankrupt, then surely his currency affects the entire human stock market, including who we are. The integrity of any culture is always reflective of a wider, human civilisation. Art that preserves or protects nationalist interests is always in danger of reducing the human to the tribal, often at the cost of reducing the human to the inhuman. The other is where we are from, where we are heading towards. The other is who we ourselves are.

I want to share with you my impression of cia rinne whom I saw the other day at her book launch at St. George’s Bookshop in Berlin:
She has a new book out which contains all her three collections up to now – “zaroum” (helsinki 2001), “notes for soloists” (stockholm 2009) and “L’usage du mot” (berlin, 2017) –
and she is performing very very well, as a stage artist, but in what way could this be part of an anthology of world poetry? as texts considered? in which language is she writing, multilingual as she is, writing and performing in both French, English and German?
[New edition: Kookbooks Poetry series nr 82-3]

I would be interested in what you feel about her poetry?

Please have a look a her video: